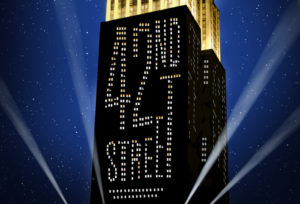 Highly Recommended ***** Often, I am asked “How can you keep seeing the same show, year after year?”. My explanation is very simple. Every production is new and fresh. Each director has his or her own slant on what the author was trying to convey and often, a different slant on the choreography can change the memories we have had for years.  For example, “42nd Street” that well known musical comedy that details the story of a chorus girl who works her way to stardom, has been around for years. With a book by Michael Stewart and Mark Bramble, based on the novel by Bradford Ropes. The music is by Harry Warren with lyrics by Al Dubin. Take a look at the song list: “You’re Getting To Be A Habit With Me”, “Dames”, “We’re In The Money”, “Lullaby of Broadway”, “Shuffle Off To Buffalo” and of course “42nd Street”. These are songs that have managed to stand alone and are performed by a myriad of artists ( and have been for many years). The story is one of simplicity.

A Big Broadway director has a show that will bring his glory back. The man who is financing the show has a girlfriend who he desires to have the starring role. She as it turns out is past her prime ( dance-wise) and has her own ideas when it comes to romance. A young chorus-line-wannabe gets pushed to the side, but due to circumstances beyond her control is placed in a position to save the show! That is the basic idea of this 1980 Tony Award winner for Best Musical. Yes, I have seen this play numerous times, but have to tell you that under the direction of  Michael Heitzman (who follows the patterns set by original director Gower Champion) and with unreal choreography by Jared Grimes, I found myself on the edge of my seat anticipating each number to see where they had modernized or altered it. Remember, this was 37 years ago! 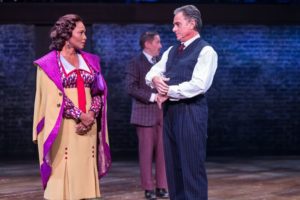 The cast that has  been assembled for this production is filled with some of the best tap dancers I have watched on a stage. In the role of the director Julian Marsh is Chicago favorite Gene Weygandt, who has been thrilling audiences in town ( and New York) for years. The young male lead, Billy Lawler , is played by the amazing Phillip Attmore ( boy can he tap!). The star of the show, Dorothy Brock, is played by the vivacious Suzzanne Douglas ( not calling her a little grey in te years, but for Julian Marsh, she is on the way out, not the way in). However, she is IN due to the financing of her beau Abner Dillon (deftly handled by Cedric Young). The young starlet/chorus girl who missed the audition is played by the adorable and VERY talented Kimberly Immanuel ( she can sing, act, and can she dance!). 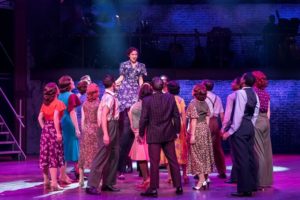 A production such as this relies heavily on the talents of the ensemble. They have an amazing group of dancers with dynamic voices as well!  Justin Brill, Annie Jo Ermel, Erica Evans, Mandy Modic, Sherra Schnack, Brandon Springman, Bret Tuomi, Time Brickley, Lamont Brown, Tristan Bruns, Joe Capstick, Andre Collier,Gabriela Delano, Anthony Sullivan Jr., Davon Suttles and a special acknowledgement of Donica Lynn asMaggie Jones ( she is sensational!). It is this group that truly makes the show what Drury Lane wants to serve their audiences. Under the skillful eye of  Producer Kyle DeSantis, this solid production of “42nd Street” should play to full house for the duration of the run.

Special features of the production are microphones in the tap shoes, sending the sound to the very back of the house and the sound of tap is magical in the theater. Collette Pollard’s set is designed to take the focus from the sets 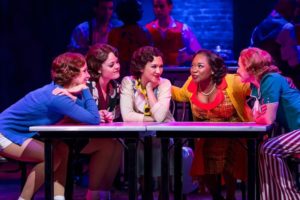 to the performances and I for one, loved that! Mike Baldassari’s lighting is sheer perfection, including some spots that must be spot-on to create the imagery it is designed to , and the sound by Ray Nardelli is as always “right on”. We sat near the rear of the house, and never missed a word ( or tap). The musical direction, as always is by Roberta Duchak and the 42nd Street Orchestra  is conducted by Chris Sargen (also on the keyboards). The eight musicians are ON the stage instead of in the pit, again, bringing an intimacy to the larger venue at Drury Lane Oakbrook.

I must tell you that the Act One Finale, “We’re in The Money” is an award-winning production on its own. Over the years, large dimes have been carried out and the ensemble members did their tap on these “platforms”. In this production, the dancers bring out the dimes, and take a bag of coins which they pour out into the bowl-like coin and then proceed to tap dance on the metal coins- WOW! Worth buying a ticket just to see this number, BUT why not see it all. This amazing production will continue at Drury Lane Oakbrook thru the holidays concluding on January 7th with performances as follows: 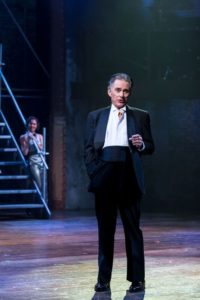 There are also some dinner and or lunch packages available and as always plenty of free parking.

To see what others are saying, visit www.theatreinchicago.com,go to Review Round-Up and click at “42nd Street”. 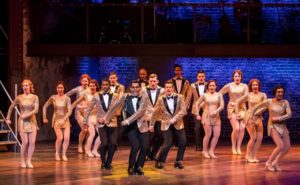