The Oakbrook Terrace production shows why well-crafted mysteries are so enduring, is suitably macabre and ably highlights the writer’s humor and underlying moral commentary. 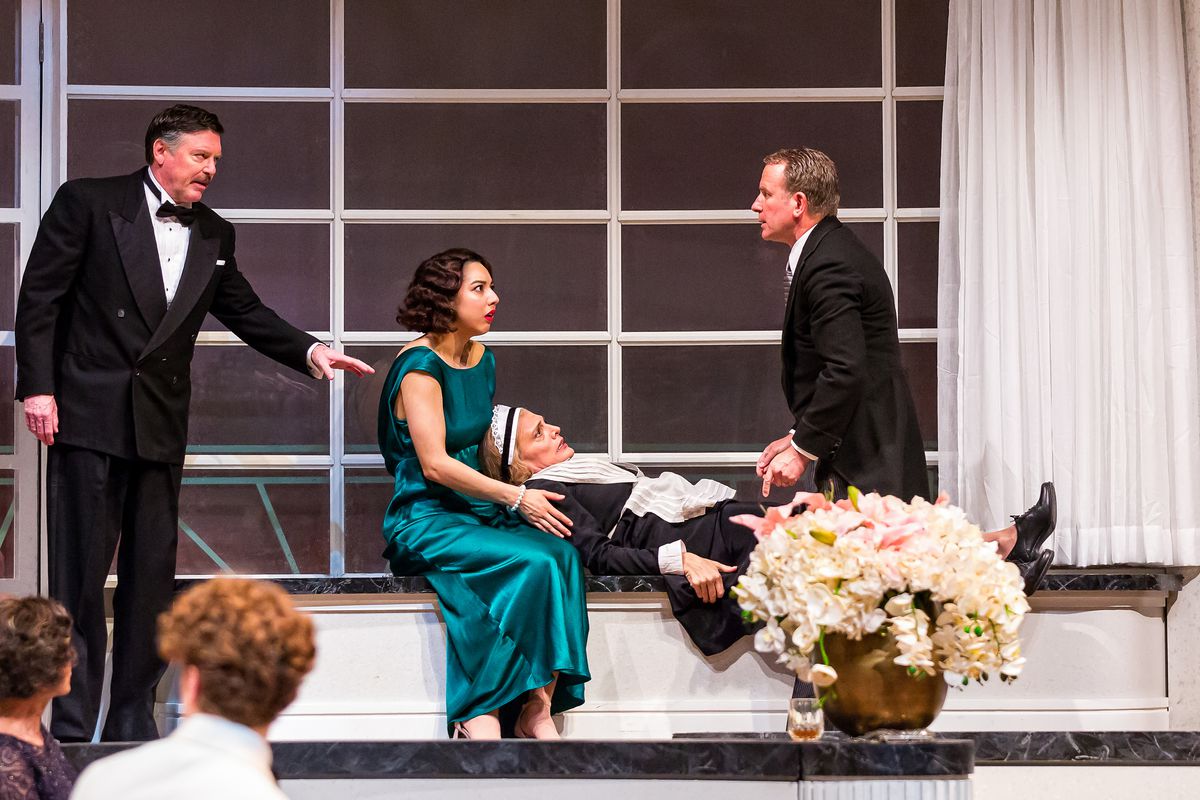 David Kortemeier (from left), Cher Alvarez, Jennifer Engstrom and Paul Tavainini in “And Then There Were None” at Drury Lane Theatre. Brett Beiner

You know this story. Eight or so desperate, disparate strangers are lured to an isolated, foreboding, inaccessible locale.

Before they can so much as unpack their luggage, the guests start dying, toppling like pieces in a game of “Clue,” leaving the ever-diminishing number of survivors scrambling to hang on to their wits and their lives.

We take it for granted now, but Agatha Christie’s 1943 play “And Then There Were None,” adapted from her 1939 novel, was a game-changer in the murder-mystery genre. Everything from movies such as “Friday the 13th” (trap teenagers in the woods, and kill them) to “Columbo” (trap the suspects in a room, and unveil the killer) owe a debt to Christie.

Director Jessica Fisch’s fine staging of Christie’s “And Then There Were None” shows why well-crafted mysteries are so enduring. First, playing armchair detective is a satisfying pastime. Beyond that, Drury Lane’s staging ably highlights the humor and the underlying moral commentary (Christie was excellent at shading fat cats and hypocrites).

Fisch’s cast embraces the tropes of the genre with honesty, rather than winking melodrama, and that makes all the difference. You’ll sympathize with the imperiled group and its preposterous circumstances. But you’ll also get the full, prurient, grisly entertainment value of watching the people creatively knocked off one by one.

Fisch doesn’t cheat: Some of the murders take place in plain sight, the weapons visible, should anyone know where to look. But you won’t know because Fisch’s powers of misdirection are so well honed. A hypodermic needle that was right there the whole time won’t register in your field of vision until it’s too late. It’s impressive.

Fisch bookends the production with two arresting visuals: When the lights go up (and there’s evocative work throughout by lighting and projection designer Driscoll Otto), they’re on the suspects, still as a grave, faces as blank and unknowable as a paper bag and almost as featureless.

What happens in between, well, that’s the play. And Fisch’s cast bites into it with relish.

Harried cook Mrs. Rogers (Jennifer Engstrom, (who can make even a request to pick up the milk terrifying) knows something is amiss from the start. Emily Brent (Marilyn Dodds Frank) is a restrictively religious woman with a damning secret and the snippy, weary demeanor of someone who gets through life by finding fault in others because examining her own would be far too painful. 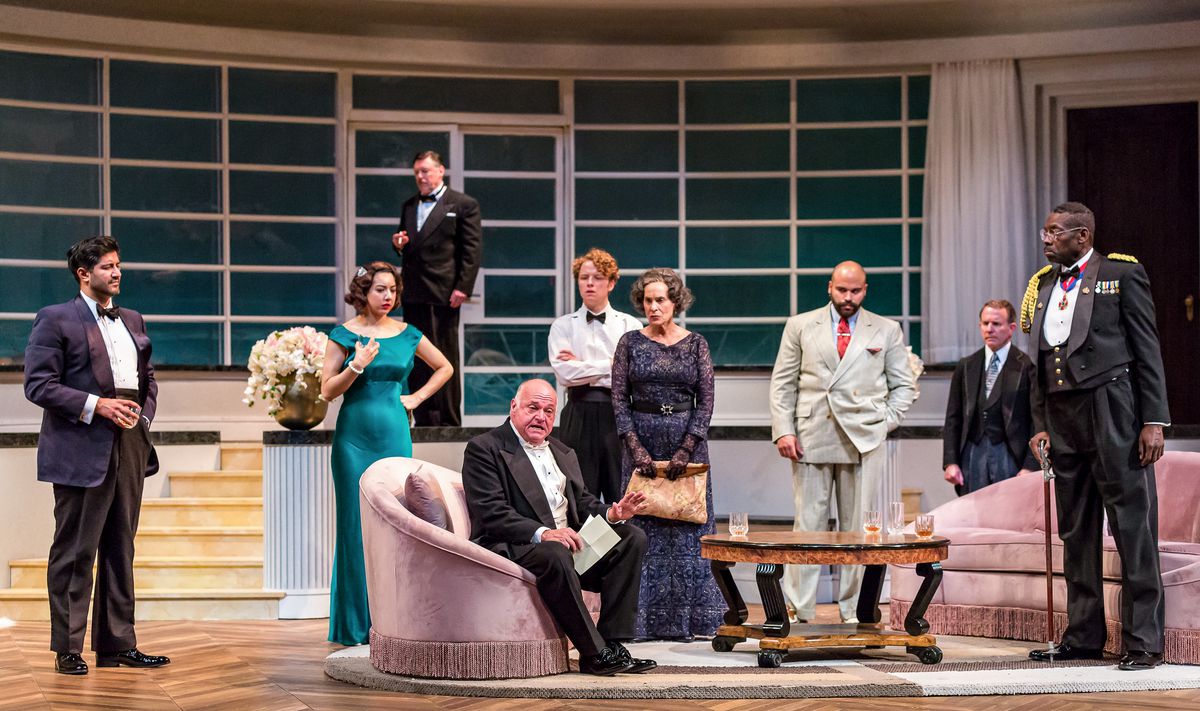 The cast of “And Then There Were None” at Drury Lane Theatre. Brett Beiner

Sir Lawrence Wargrave (Matt DeCaro, who gets a boffo final scene you do not want to miss and that describing would result in spoilers) ) struts officiously as befits his status as a pillar of mid-20th century patriarchal jurisprudence. Or so he does until he gets one of the most memorable death tableaus in the production. (A bathroom fixture and textile supplies are involved.)

Cher Álvarez makes former governess/aspiring secretary Vera Claythorne more astute and stronger than anyone gives her credit for. She’s the Final Girl, a seemingly wholesome heroine with the brains to survive.

Also memorable is Paul Jordan-Jansen as Detective William Blore, a stentorian-voiced sleuth who’s in way over his head. Still, he radiates the decency that makes him someone you’d trust to steer a rickety canoe back to the safety of the mainland at midnight.

Among the others lured to Soldier Island off the coast of Devon, England: General Mackenzie (Bruce A. Young), a fellow with kingly bearing and a possible history of crimes against humanity; spoiled dilettante Anthony Marston (played by Casey Hoekstra the night I saw it, Zachary Keller most nights); and Philip Lombard (Yousof Sultani, nicely straddling the line between villain and hero), a soldier of fortune.

The play’s title refers to “10 Little Soldiers,” a nasty little poem framed above a mantelpiece holding figurines of 10 little soldiers. In each verse, one of the 10 dies in a gruesome little couplet. As the guests start dying like the soldier in the poem, the figurines, in turn, begin toppling.

As Fisch’s cast digs into the whodunit, they’re surrounded by set designer Andrew Royce’s beautifully airy seaside manse, the vast ocean visible from massive windows. The palette is all ocean and salt, a breezy, clean, almost antiseptic environment where bloodshed stands out in shocking relief.

Speaking of which: Late in the second act, the audience briefly glimpses a smear of blood suddenly splay onto a window. It’s shocking and unexpected. It’s also a wonderfully macabre moment in a show full of them.