“And Then There Were None”

★★★★★If you love a good thriller, you will truly be captured by the new production of a very old classic, “And Then There Were None” on the stage at Drury Lane Theatre, in Oakbrook Terrace. Drury Lane does one non-musical each year and for this season, they selected Agatha Christie’s mystery thriller that has been done in films several times, under this title as well as “10 Little Indians”. For those of you familiar with any of the films, the “Indians” have been changed to “Ten Little Soldier Boys” in order to be politically correct. By the way, there have been countless film versions with many a major star wanting to be in it.

The story is about a group of people who have been invited to an island home of a character we never meet, U.N. Owen. ( say the name quickly, and you will start getting into it) The set (Andrew Boyce has done a marvelous job) is an amazing home where we are in a beautiful living room and there are doors leading to other areas of the home as well as  the deck that surrounds it. This is an island and once the boats leave, there is no other place to go. The first act starts a little slow in that we need to meet all of the visitors and learn a little about their personalities.

We first meet Vera Claythorne ( played to perfection by Cher Alvarez) who has been hired by the host as a secretary. She has never met her employer. She is on the same boat as Philip Lombard ( deftly handled by Yousof Sultani) and they are greeted by the “butler”, Rogers ( Paul Tavianini). Rogers,  along with his wife, Mrs. Rogers (Jennifer Engstrom) are the caretakers of the home and she is the cook. Little by little, we meet the rest of the characters; a magistrate, Sir Lawrence Wargrave ( Matt DeCaro is incredible in his adaptation of this man), a former police officer, William Blore ( a superb job by Paul-Jordan Jansen), Anthony Marston (Zachary Keller), Dr. Armstrong ( David Kortemeier does an outstanding job with this role), the aging General Mackenzie ( Bruce A. Young truly nails this character), the dowdy Emily Brent ( the always superb Marilyn Dodds Frank) and  Casey Hoekstra. 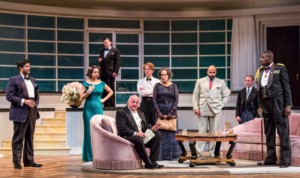 Sharply directed by Jessica Fisch this play is done in three acts, but only one real intermission. I will explain this but please understand , this is a “murder mystery” and I do not want to reveal any of the mystery as Ms Fisch has truly created a beautiful production.

Here is what I can tell you. Each of the characters has a secret. A deep dark secret and they have all been asked to this island retreat so that they can be punished for their deeds. We are in Devon, England ( I still feel that this can be

transformed to an East Coast setting and then the actors do not have to use accents at all) and once we meet them, we hear a message from their “host” advising them all of what each has done in their pasts. Act One ends with one of them being murdered and one of the ten little soldier boy statues falling from the mantle and crashing. Yes, there are ten statues that will be smashed along the way as members of this cast leave us.

Act Two is in two scenes and once again, each scene ends with a murder, then a brief pause ( do not leave your seats during this pause, as you will miss some powerful stuff in the next scenes). The Third Act is also in two scenes leading up to a spectacular conclusion. This is not a run of the mill mystery. In this play we are unsure as to if the killer is on the island, in hiding, doing “his or her” thing, or could it be one of the guests. As we watch then die off and see the statues break, we begin to see that each character begins doubting those around them. Who does one trust in a case like this? How can they escape this feeling of being trapped and afraid for their lives? This edge-of-your-seat mystery will astound you as it reaches its conclusion.

The creative team, in addition to the beautiful set by Boyce is as follows: Costumes ( Jessica Pabst truly does some fine work- lots of changes), lighting (Driscoll Otto) and sound/music composition ( Ray Nardelli, as usual does wonderful work). The wig design is by Claire Moores and the fight captain, Casey Hoekstra, does a masterful job. 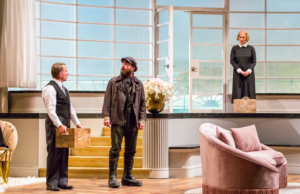 On the wall, above the fireplace is a rhyme:

Ten Little Soldier Boys went out to dine; one choked his little self and then there were nine

Nine little soldier boys stayed up very late; one overslept himself and then there were eight

Eight little soldier boys travelling in Devon; one got left behind and then there were seven

Seven little soldier boys chopping up sticks ; one chopped himself in half and then there were six

Six little soldier boys playing with a hive; a bumblebee stung one and then there were five

Five little soldier boys going in for law; one got in Chancery and then there were four

Four little soldier boys going out to sea; a red herring swallowed one and then there were three

Three little soldier boys walking in the zoo; a big bear hugged one and then there were two

Two little soldier boys sitting in the sun; one got frizzled up and then there was one

One little soldier boy left all alone; he went and hanged himself and then there were none!  and some statues that as the evening progresses will all be gone. Powerful story, well told and delightful acting. A bit slow on the start, but we need to know the characters for it to work and it does work!

“And Then There Were None” will continue at Drury Lane Oakbrook thru September 1st with performances as follows: 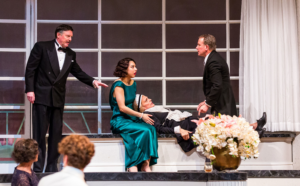 The theater is located at 100 Drury Lane in Oakbrook, just north of te shopping center. There are dinner packages available as well and plenty of free parking.

To see what others are saying, visit www.theatreinchicago.com, go to Review Round-Up and click at “And Then There Were None”. 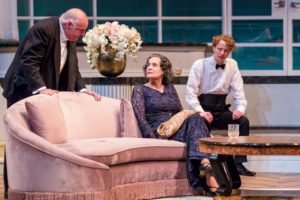