"'Beauty and the Beast' is my favorite and my father's favorite Disney movie of all time," Stephan said, estimating that she first saw the film on VHS videotape around the age of 4.

"My father and I would dance to 'Beauty and the Beast' in the living room, so it's kind of our song," Stephan said. "He was very excited when I got cast."

To stage Drury Lane's first production of "Beauty and the Beast," the DeSantis family producers approached director Alan Souza. His previous Oakbrook Terrace credits include a critically acclaimed "Camelot" in 2014 and this year's controversial "Joseph and the Amazing Technicolor Dreamcoat," reset in a Las Vegas hotel room.

"I was surprised at first," said Souza, thinking back to when he saw Disney's 1994 stage adaptation during its 13-year Broadway run. Souza said his initial impressions were all about the lavish spectacle and that "they just put a cartoon onstage." 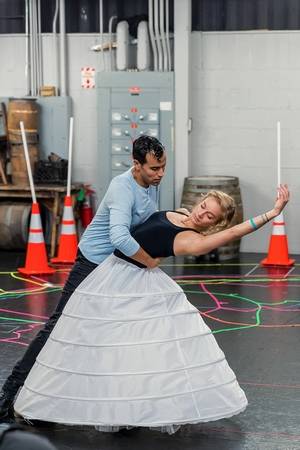 Yet upon rereading Linda Woolverton's script and the lyrics by Howard Ashman and Tim Rice to composer Alan Menken's score, Souza saw more contemporary relevance in Disney's beloved "tale as old as time."

"It's a play that has great resonance for our time in terms of how we perceive people based upon their outside appearances and how we have to look deeper," Souza said.

Souza and his "Beauty and the Beast" design team appear to have taken a traditional approach to the Disney favorite. Drury Lane has posted design sketches online by both scenic designer Kevin Depinet and costume designer Ryan Park. "I've never seen costumes that have inspired me more as an actor," said Stephan about Park's fairy-tale designs. "They are so beautifully thought-out and so creative."

A self-professed Disney fan, Stephan made a point to see the company's live-action film adaptation of "Beauty and the Beast" last year (with her father, of course). She also caught the non-Equity touring version during one of its visits to Chicago's Loop.

But now that she's embodying Belle as part of an acting ensemble, Stephan is glad that she gets to take some ownership over the role. "It's really nice to see this new life that all of my fellow actors are breathing into the story," Stephan said. "It pays homage to the cartoon, but it's very fresh and I'm hearing this movie that I knew so well in a new way."

As a Drury Lane veteran in past productions such as "Crazy for You" and "Irving Berlin's White Christmas," Stephan is once again excited to perform over the holiday season in a family-friendly show.

"Belle represents such tenacity and strength for young girls and boys in speaking her mind," Stephan said. "I think her superpowers are intelligence, heart, imagination -- all those things that you have as a child that you don't want to lose and being able to question and wonder and never let what society tells you to stifle that."

"Beauty and the Beast"