Highly Recommended **** Every year, Drury Lane Theatre-Oakbrook, known for its musical productions, takes one play off, and does a straight play. This year, the play is “Cat On A Hot Tin Roof”, Tennessee Williams’ sultry play about a disjointed family residing on a plantation along the Mississippi Delta in the mid 1950’s. Sharply directed by Marcia Milgrom Dodge on a marvelous ( yet, confusing) set by Kevin Depinet, we get to watch as this dysfunctional family deals with the current health prospects of the Patriarch of the clan, Big Daddy ( played to perfection by  Matt DeCaro).

The majority of the action takes place in the room of the youngest son, Brick ( powerfully played by Anthony Bowden) a former football star, now an announcer, and as we find out Big Daddy’s favorite, and his wife, Maggie ( the very sultry Genevieve Angelson). They are the childless couple, while older brother Gooper ( Michael Milligan) and his wife, Mae ( deftly handled by Gail Rastorfer) have one child after another. It seems that Gooper thought that is what his Big Daddy wanted from him. The Matriarch of the family, Big Mama ( Cindy Gold with a delightful interpretation) is concerned about her baby, Brick as well. 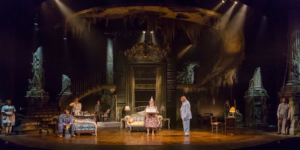 During the course of Williams 2 1/2 hour epic, we learn a great deal about the skeletons that are in their closets, and we also learn that Big Daddy’s health is in question. Knowing that his health might fail, his children begin the process of considering what will happen to this magnificent estate. On this particular night, all of the family is assembled for Big Daddy’s birthday, but might there be more to it? Might there be new questions to consider? 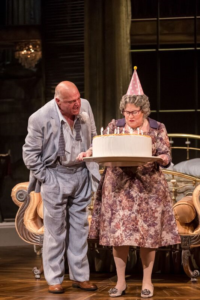 The cast of players is strong and we as the audience become the proverbial “fly on the wall” learning about each of the family members and their pasts. The other cast members of note are Joe Bianco as the Reverend Tooker, who has come by to celebrate the birthday and Craig Spidle as Doctor Baugh, who during the second act takes us on a side trip into the future of Big Daddy. The house servants are played by Donica Lynn and Reginald Robinson Jr.  In the program there are several children listed ( I guess they are the children of Gooper and Mae): Amir Henderson, Brooke Macdougal, Guinnevere Neville, Wyatt Robertson and Chloe Schueller. While we hear them and glimpse some offstage action, I am not sure they are important cogs in the wheel as far as this well told story being on the stage.

The show is suggested for 13 years of age and up as there is language and adult themed material. 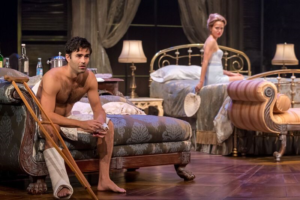 “Cat On A Hot Tin Roof” will continue at Drury Lane Oakbrook , located at 100 Drury Lane in Oakbrook thru August 26th with performances as follows: 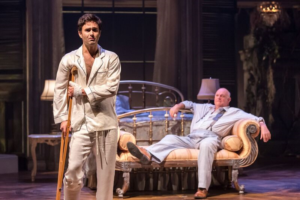 To see what others are saying, visit www.theatreinchicago.com, go to Review Round-Up and click at “Cat On A Hot Tin Roof”.