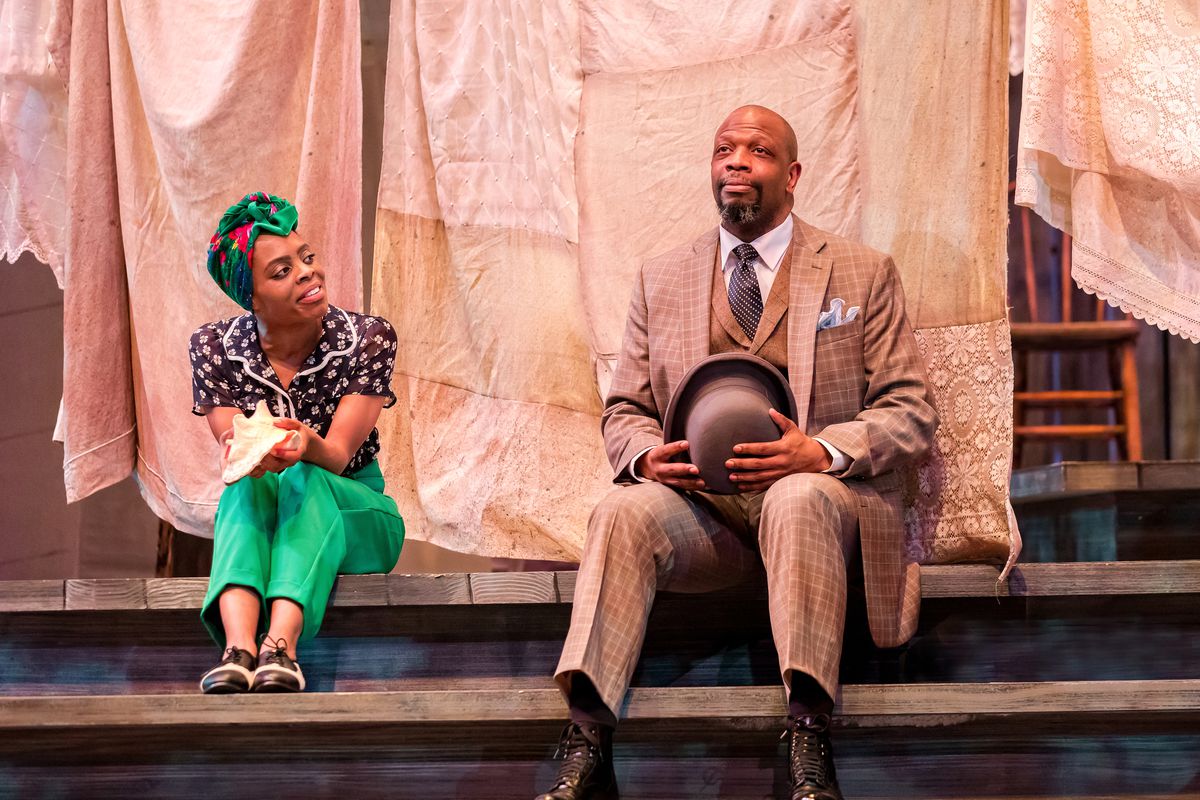 Eben K. Logan as Celie and Melvin Abston as Mister in a scene from “The Color Purple” at Drury Lane Theatre. Brett Beiner Photography

The singsong children’s clapping game that opens “The Color Purple” shows up at least three times within the musical’s rich, deep score. The opener is as giggly and playful as you’d expect from sisters Celie and Nettie, two girls barely into puberty.

The second time we hear “Papa don’t like no screamin’ ‘round here/No lip from the woman when they chug that beer,” it foreshadows the brutal life waiting for Celie, 14, after she’s forced to marry a man twice her age, who believes women are pack animals and must be regularly whipped.

The final time we hear the rhyme, it’s an expression of joy a long, long-time coming. When that hard-earned wonder and elation erupt in the production’s finale, so should the audience. Director Lili-Anne Brown’s staging is, indeed, wondrous.

Run time: 2 hours and 45 minutes, with one intermission

“The Color Purple” (music and lyrics by Brenda Russell, Allee Willis and Stephen Bray, with a book by Marsha Norman) hews close to Alice Walker’s Pulitzer Prize-winning 1982 novel. Like the novel, Brown’s production emotionally pulverizes you with the relentless cruelty and hardship visited on Celie (Eben K. Logan). And after it batters you with the story of a child raped, sold, beaten and forcibly separated from her babies and her beloved sister, “The Color Purple” lifts you up as kindness, hard-earned forgiveness and stubborn, tenacious goodness prevail against all odds. The lows in Brown’s staging would have you believe that the universe is indifferent and evil runs unchecked. The highs will make you believe even unchecked evil and indifference can’t win, not over the long haul.

And “The Color Purple” covers a long haul. Like the novel, the musical spans more than 30 years, opening in the early 1900s when Celie is 14 and pregnant with her second child — both products of rape. Celie’s beloved sister Nettie (Kyrie Courter, radiant with compassion and loyalty) is allowed to go to school. Celie is sold off like livestock to Mister (Melvin Abston).

Logan is so believable as a giggly, innocent child that it’s gut-twisting to watch her tossed away like a piece of broken furniture. But there’s a core of pure, gleaming steel to her innocence. Celie’s journey into her own power takes decades, and Logan pulls the audience with her for every single transformative step in that vivid metamorphosis.

Celie’s evolution is shaped by formidable women: Juke joint siren Shug Avery (Sydney Charles, fully embodying Shug’s billing as a “sultry vocalist” ) owns her sexuality with a confidence that demands respect and makes her irresistible to Mister. Charles is all power and sizzle, an effortless seductress who will not be boxed into society’s rules of propriety. It’s easy to see why Shug so astounds Celie. 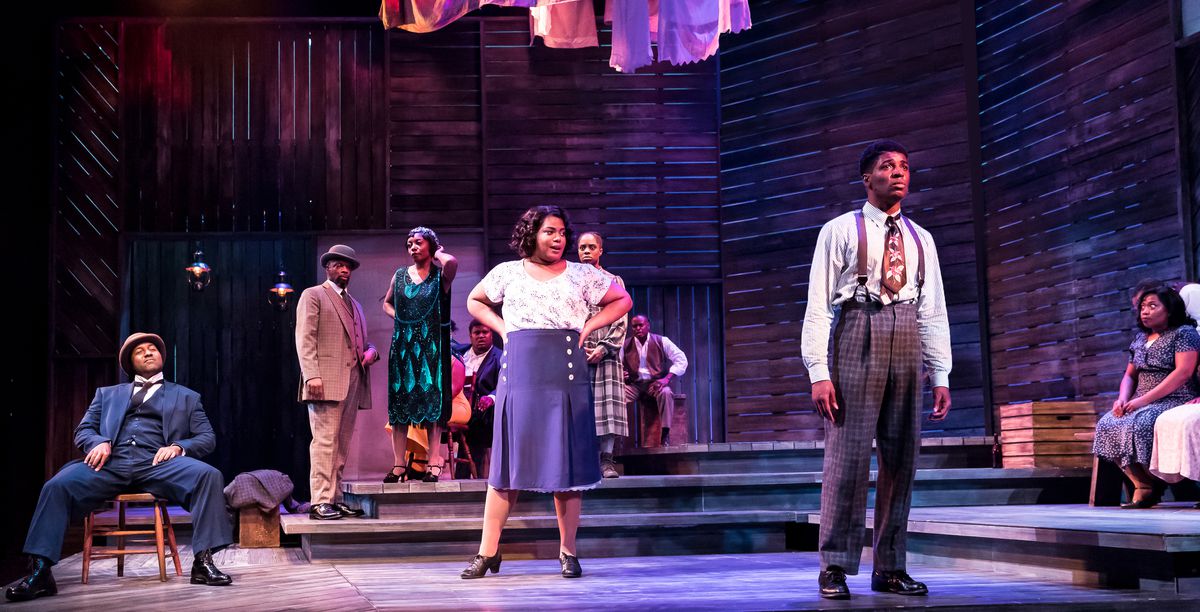 Nicole Michelle Haskins (as Sofia, center) and Gilbert Domally (right, as Harpo) and the ensemble cast in a scene from “The Color Purple” at Drury Lane Theatre. Brett Beiner Photography

Then there’s Sofia (Nicole Michelle Haskins in an unforgettable turn that puts the “hell yes” in Sophia’s iconic “Hell No.”), married to Mister’s son Harpo (Gilbert Domally, believably besotted). Sofia moves with the unswerving confidence of a ship’s prow with the wind at its back, Harpo happily paddling along in her wake.

Walker centered “The Color Purple” on Celie, but all of the principals in the epic story are shattered and re-forged. Abston’s Mister is as vicious as you’d expect from a man who cracks a bullwhip with terrifying accuracy and ease — but there’s something else, too. Abston makes you wonder what happened to Mister that left him so dead-eyed and abusive. When the audience finds out, it’s a moment that speaks to the trauma borne of ruthless, enraging oppression.

Under music director Jermaine Hill, Brown’s 19-strong ensemble does right by the show’s magnificent score. There are come-to-glory gospel hymns, down-and-dirty bump-and-grinds, jazz that stutters, dips and dives, and gorgeous alto arias as rich and ripe as an orchard in summer. When Lorenzo Rush Jr. leads the choir in “Mysterious Ways,” he ignites a fire that could sanctify an atheist. When the ensemble finishes the final, ethereal notes of the title tune, the harmonies don’t seem of this earth.

Walker’s unflinching narrative demands a significant emotional investment. The highs are dazzling aeries, the lows valleys of darkness. Give it your heart. It’s worth it.