★★★★★ There was a buzz at Drury Lane Theatre, both before the opening of “The Color Purple” and even louder after. Many of us know the film and play from the past ( and of course “Oprah”), but the changes made to this marvelous story are powerful. The music in this musical (Brenda Russell, Allee Willis and Stephen Bray) is powerful and adds to the story. The book by Marsha Norman is based on the novel written by Alice Walker and the Warner Brothers film, as we are told a story that takes place between 1911 and 1945 in rural Georgia. The times were different.

Our story centers on two sisters, Nettie ( Kyrie Courter) and Celie ( an incredible performance by Eben K. Logan, who many might remember from her stint in “Matilda”). Their father, Pa ( deftly handled by Sean Blake) owns a store and a farm. We later learn that he was their step-father and being the period of time, ownership for a Black man gave them power. The love between these sisters is powerful, but Pa has plans for his daughters. Celie has given birth to two children, who Pa has given away, and now he is selling Celie to Mister”( powerflully played by Melvin Abston), an abusive man who wants a maid, and has no feelings for her.  When Nettie tries to move in with them, Mister tries to take her, and so she leaves. As it turns out, she meets a family that is off to Africa to do Missionary work and go with them and their children. 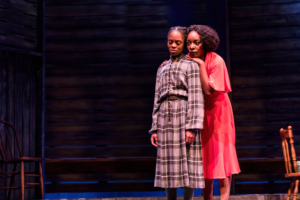 The other parts of this story are about Mister’s son Harpo (Gilbert Domally) by a previous wife and his relationships with both his father, and the women he loves. One of those women is Sofia ( played to 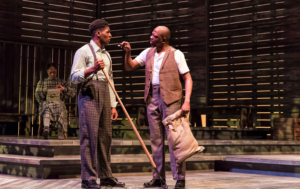 perfection by Nicole Michelle Haskins), the other, Squeak  (Melanie Loren). These are the main characters of a brilliantly directed production by Lili-Anne Brown. While we have seen many productions in the past, most were directed by men and to be honest, with the heart and soul of a woman behind this production, it rises above previous productions. You may think you have seen “The Color Purple”, but you haven’t seen THIS “The Color Purple”.

The cast they have assembled is solid, many taking on several roles as we travel through the years. Mister does have a true love interest, a performer, Shug Avery ( an incredible performance by Sydney Charles). She has the power over him but is different. She is in love with love and shows Celie that love can be good. What is the story truly about? Is it the tale of two sisters who get separated but find each other in the end? Yes, that is part of what we are experiencing, but even more, it is a story about finding love and learning to survive. It is a story about women taking the lead instead of being “used” and “abused”. 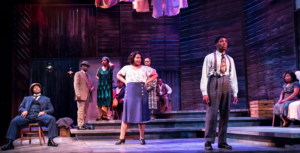 The story tackles many topics dealing with women during a time when they had no rights. It shows us how a strong woman can overcome the poverty of her life and the abusiveness of her man and most of all, it shows how love can triumph over all. The show runs pretty close to two-hours-forty-five minutes with a 20 minute intermission, but feels much less. I do suggest bringing a few tissues for the ending ( I think three might work for most). The cast of players ( a/k/a the ensemble) is standout in every way. The Church ladies ( Alexis  J. Rosten, Camille Robinson and Shantel Cribbs ), Lorenzo Rush Jr., Joey Stone, Marvin Malone II,  Adia Bell, Gabriel Mudd, ,  Adhana Reid ,Chuckie Benson and Jos N. Banks. Great work!!

The orchestra, led by Maulty Jewell IV , is small in numbers, but filled the theater with great music. The choreography ( Breon Arzell )is pure artistry and uses the stage of Drury Lane to perfection. The set (Arnel Sancianco) makes the stage appear smaller than usual, but allows us to move from one spot to another with ease, keeping us in the story with no hesitations. The lighting (Cat Wilson) and sound (Ray Nardelli) are great. note: there was a mike mishap that was fixed rapidly and did not affect the production. The costumes (Samantha C. Jones) are wonderful and very colorful and the props (Cassy Schillo) perfect. One of the new tech items is  projections, and for this one Paul Deziel did some great work. 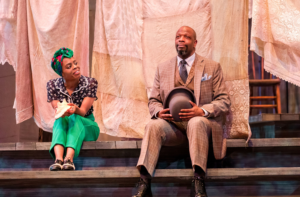 “The Color Purple” will continue at Drury Lane Theatre in Oakbrook thru November 3rd with performances as follows: 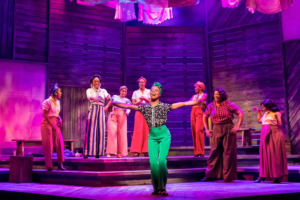 The theater is located at 100 Drury Lane in Oakbrook Terrace, just north of the Oakbrook Center with plenty of free parking.

To see what others are saying, visit www.theatreinchicago.com, go to Review Round-Up and click at “The Color Purple