Highly Recommended **** As we were leaving our home yesterday, heading thru rush hour traffic to Drury Lane Theatre in Oakbrook, Jane said , “We have seen “Beauty and the Beast” so many times. Why, again?” I always tell her, that the great thing about live theater over film is that every time you see it, it is different! A different cast, different director, set, stage. Yes, for the most part the script is the same, the score ( with some modifications, at times) but even the responsiveness of the audience can change the production. At least for that night.

The production of “Disney’s Beauty and the Beast” on  Drury Lane’s stage is exactly what we discussed. The music is still that of Alan Menken, the lyrics by Howard Ashman and Tim Rice and the book by Linda Woolverton, but this production, sharply directed by Alan Souza and superbly choreographed by Ron De Jesus is as close to perfection as one can get in a live performance. There are no cuts and splices as with film, so these two creative minds have to trust their cast to make the story come to the audience as they planned. It is up to the cast, and in this case, they were flawless. 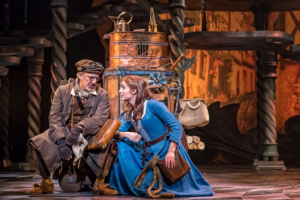 “Beauty and the Beast” is not “just a Fairy Tale” about a monster and a beautiful girl who fall in love. Yes, there is a curse and yes there is a villain, but the story is about the ability to look past those that are different and get deep into their actual “being’! In this version, we learn more about Belle’s love of books and the importance of reading books. A great message for our youngsters, who rely on their thumbs and electronics to find answers. The play begins with a back story. A prince , not being kind to an old witch, has a curse placed on him and his castle. Until he can find someone to love, who loves him back, he will be a “Beast” and his staff will become “what they are or do”! 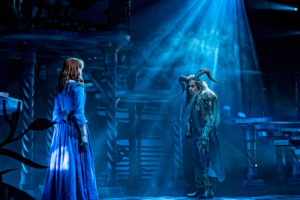 Back in town, Belle (a delightful portrayal by Sierra Schnack, who will do the role until November 30th) and her father , Maurice (as always ,Mark David Kaplan does a splendid job, it seems he has been playing fathers for 30 years, but always to perfection) are seen as the outcasts. He is an inventor, she a reader of books. The townspeople are uncomfortable with them, and refer to them as outsiders and perhaps a bit crazed! Also there is the local bully Gaston (Mark Banik has a fine voice and brings life to this character, but his stature is not that of what one expects) and his sidekick  , LeFou (deftly handled by Paul Michael Thompson), who brings some comical  slapstick  to the story. Gaston has made up his mind that Belle is the wife for him. Every other woman in the town would relish this moment, but Belle, says NO! 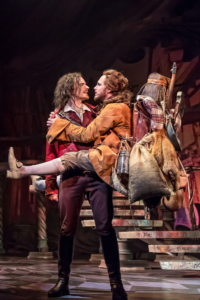 As Belle’s father, brings his new invention to a contest, he gets lost and ends up being held captive by the Beast ( Brandon  Contreras, making his Drury Lane debut is a powerhouse). Belle goes to his rescue and trades herself for him. This is where the story gets stronger and we are allowed to watch a great love come to be. Yes, all the odds are against a beauty having a relationship with this beast, but this is where we get the deep in the heart of humans, each sees something in the other that has meaning. 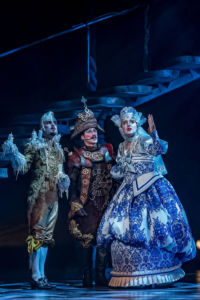 While this love story is building ,we have some fun with the characters of the house that have been transformed from people to objects.Cogsowrth ( Nick Cosgrove brings great energy to this character), Lumiere (Tony Carter lights up the stage), Babette ( the very sexy Allison Sill), Mrs. Potts ( the incredible Bri Sudia, who will knock your sox off with her solo “Beauty and the Beast” ), little Chip ( Sophie Ackerman is adorable/this role is played by Graham Carlson on matinees and Sundays) , Madame De la Grande Bouche (gloriously handled by Catherine Smitko) and a highly energetic ensemble who have some great “show-stopping” numbers.

The ensemble includes Anthony Avino, Greg Blackmon, Liz Conway, Shantel Cribbs, Timothy P. Foszcz, Samuel Gardner, Maya Kitayma, Ivory Leonard IV, Omar Madden, Cournty Martin, Conner Wayne Milam, Zac Porter, Emma Rosenthal, Billy Rude, Isaih Silvia-Chandley and Shanna Vanderwerker. Many of these players also do small roles that are of great importance to the telling of this story. Billy Rude takes on the role of Monsieur D’Arque who plots with Gaston to steal Belle’s heart by placing Maurice in danger. As I always say, the strength of the ensemble is what makes a musical a musical! “Be Our Guest” is a true show-stopper and these performers seem to be having as much fun as the audience .

The technical aspects of the show are wonderful. The rotating staircases (Kevin Depinet) allow us to move from town to castle with speed and never miss a beat. It takes a scene or two, but once into it, you will not be bothered by this. The lighting (Ryan O’Gara) and sound (Ray Nardelli) are great and the costumes (Ryan Park) are different from the Broadway production, but in some ways, an improvement. Cassy Schillo’s props are divine and the electronic music (Ethan Deppe) adds to the flavor. The Drury Lane Orchestra led by Christopher Sargent made this score fill the auditorium. Hard to believe there were only ten musicians in the pit. 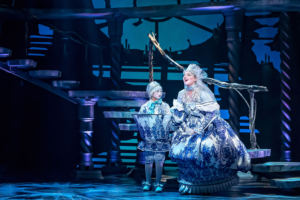 “Disney’s Beauty and the Beast” is great family fare for the holidays, even though Christmas is not involved. Drury Lane is doing a special Christmas tree inspired by the musical. Lighting will be the 24th of November and they are also hosting a contest to win tickets for their version of “A Christmas Carol” for youngsters.

“Disney’s Beauty and the Beast” will continue thru January 27th with performances as follows: 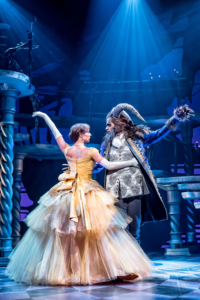 There is plenty of free parking as well as valet availability. There are dinner theater options as well. Drury Lane Theatre is located in Oakbrook at 100 Drury Lane ( just a tad north of the Oak Brook Center.

To see what others are saying, visit www.theatreinchicago.com, go to Review Round-Up and click at “Disney’s Beauty and the Beast”.