A burned-down plantation serves as the backdrop for the emotional battle that will be on display when Drury Lane Theatre presents, Tennessee Williams’ “Cat on a Hot Tin Roof.”

“Cat on a Hot Tin Roof” is known for the 1958 film adaptation starring Elizabeth Taylor, Paul Newman and Burl Ives, which received six Oscar nominations. Set at a plantation home in the Mississippi Delta, a birthday party for Big Daddy, the family patriarch, brings the family skeletons out of the closet.

Dodge, who had directed the play before, pitched it to Drury Lane president Kyle DeSantis and artistic director William Osetek when she directed “Smokey Joe’s Cafe” at Drury Lane, for which she was nominated for a 2017 Joseph Jefferson Equity award.

“It’s going to be, what I’m sort of jokingly referring to in rehearsal, as not your grandmother’s ‘Cat on a Hot Tin Roof,’” she said. “We’re honoring the text and telling the story in a way that I think Tennessee Williams would really love. He’s definitely on my shoulder every step of the way. Based on all of the research I’ve done on him and about him and about how he writes his plays and his approach to the work, he creates drama inside of the memory. We have a very exciting physical production to give this play.”

She was inspired by Maggie’s speech to Brick, especially the line about shutting the door on a house that’s on fire in hopes of forgetting that the house is burning.

“I Googled ‘burned down plantations’ actually,” she said. “I came across an amazing real burned-down plantation called Windsor Ruins. If you look at it, it was a very prominent plantation in its day. But it burned down and the only thing existing are the columns. The columns now exist in this overgrown shell of what a plantation would’ve been.”

She brought the idea to her design and production team, who were on board. Obviously they needed a bed, a bar, a couch — all the things important to the story telling — but the plantation itself is going to be ruins, she said.

Her cast has embraced the concept and is giving performances of their lives, she said.

“They’re amazing. We have Maggie the Cat played by Genevieve Angelson. She is so happy to be back in live theater, she’s been doing a lot of television lately,” Dodge said. “Anthony Bowden, who’s our Brick, is one of the smartest, sexiest young actors I’ve come across in a long time. He’s going into his fourth year at Juilliard so he’s somebody to keep an eye on because I think there is great things in store for him. And then we have some amazing Chicago actors.”

That includes Matt DeCaro as Big Daddy, Michael Milligan as Gooper, Gail Rastorfer as Mae and Craig Spidle as Dr. Baugh. The role of Big Mama will be played by Cindy Gold July 5-Aug. 12 and Janet Ulrich Brooks Aug. 15-26. Rounding out the cast are Joe Bianco as Reverend Tooker, Donica Lynn as Sookey and Reginald Robinson Jr. as Lacey.

Sometimes directors tell actors to hide their character’s feelings and motives. Not this time, Dodge said.

“In this production, we’re letting it all out. I said that’s the difference between maybe someone else’s interpretation of Tennessee Williams and mine,” she said. “I feel like this is a family that is cruel, that is unrelenting, passionate — everybody wants something and everybody will do anything to get what they want. There’s a $10 million-dollar inheritance along with a 20,000-acre plantation that is in jeopardy if Big Daddy dies with no will. So all of the family is clawing and scraping trying to get what they want. That is what is very exciting about our production — it’s going to be very raw and visceral and painful and exhilarating. All of those huge emotions one hopes to go through when they go to the theater.”

Dodge is more than ready for the challenge of directing this play and is very excited to show it to audiences, she said.

“I hope they respond as if they are seeing it for the first time. I have a feeling a lot of people will have seen other productions and will certainly have seen the movie,” she said. “What’s amazing about working on the text now is the patriarchal hierarchy of this family and in light of the #MeToo movement hearing men of a certain age in a certain time behaving in ways that might have seen acceptable or business as usual back then is no longer. We’re putting a light on that and those moments in the text are difficult and should make people uncomfortable. The play takes place in 1955 so … it comes from truth and comes from life experience of the playwright, but there are moments that are really, really hard to take. But we’re not shying away from it … we’re using it as a cautionary tale. We’re dealing with the cruelty head-on.”

“It’s a fascinating peek into one of the most dysfunctional families ever written about,” she said. “So if they like reality TV, they’re going to like this more because it’s happening right there in front of them with no commercials. I think it will be a very exciting evening.” 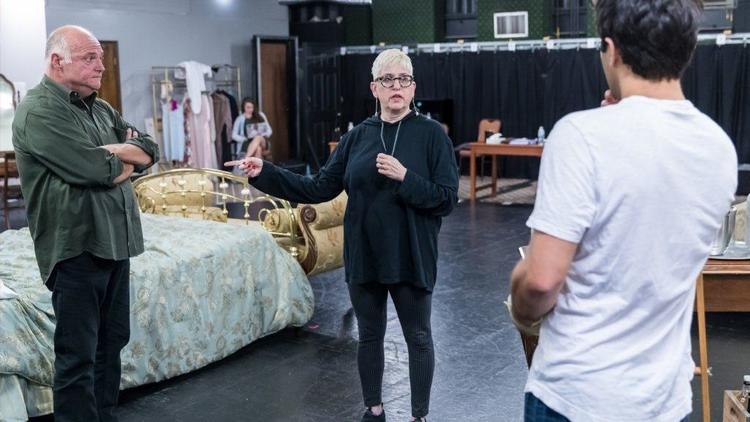 Annie Alleman is a freelance reporter for Pioneer Press.