From this melodrama about life and death, money and sex, and the lies we tell others and ourselves, Dodge crafts grand opera. Williams supplies the fundamentals in the charged, poetic language; outsize characters and the simmering sexuality. But Tony Award nominee Dodge -- along with a stellar creative team and an accomplished cast -- makes this "Cat" sing.

Briskly paced and ferociously acted, Drury Lane's production soars in this 900-plus seat theater where large musical numbers typically supply the spectacle. Not this time. In Dodge's revival, it's the aria-like monologues performed by Chicago favorite Matt DeCaro and TV veteran Genevieve Angelson that stop the show.

The time is 1955. The place is a Mississippi Delta cotton plantation -- owned by the wealthy Pollitt family -- whose fading splendor is beautifully evoked by set designer Kevin Depinet and accented by lighting designer Driscoll Otto's well-placed shadows. Depinet's set is especially evocative, revealing an estate whose interior disrepair and foundational cracks mirror the fractures within the family that inhabits it. 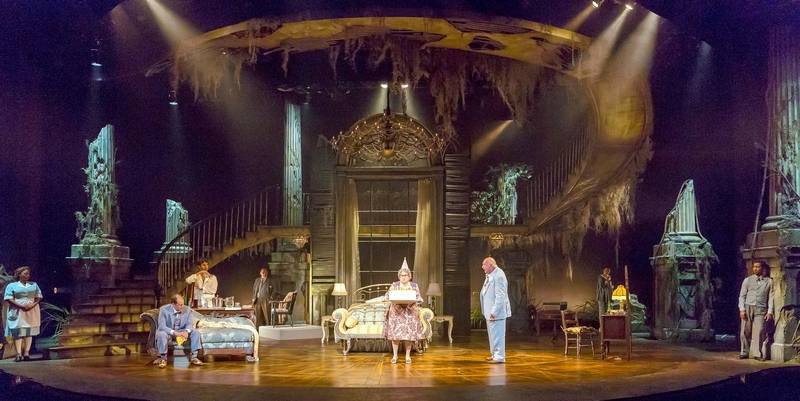 The curtain rises on Williams' portrait of family dysfunction to reveal the contentious clan posing for a photograph on the occasion of patriarch Big Daddy's 65th birthday. However one member is missing. Favorite son and faded athlete Brick (a hesitant Anthony Bowden in an underwritten part) is in his upstairs bedroom ostensibly recuperating from the broken ankle he sustained a day earlier while reliving his glory days as a high school standout.

In reality, he's drinking excessively to ease the pain resulting not from a broken bone, but from his repressed homosexuality and despair over the loss of his best friend Skipper, who drank himself to death after recognizing the true nature of his feelings for Brick.

Desperate to save her husband from the bottle (and coax him back into their bed) is his sexually frustrated wife, Maggie (Angelson, as canny as she is vulnerable), whose motives for sobering Brick up extend beyond their bedroom. She's determined to protect their share of Big Daddy's $10 million, 28,000-acre estate, which Brick's older brother Gooper (Michael Milligan) and his pregnant wife, Mae (Gail Rastorfer), seek to control for themselves and their five unseen but frequently heard "no neck monster" children. 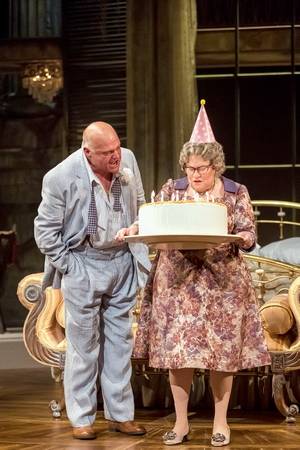 Maggie says providing Big Daddy (the superb DeCaro, in a role he was born to play) with a grandson will guarantee their inheritance. Brick rejects her suggestion.

Dodge combines Acts 1 and 2 into a 90-minute first act. The first half belongs to Angelson whose sweetly seductive, strategic Maggie analyzes the angles then plots her next move. Angelson masterfully modulates tempo and vocal timbre as the once impoverished woman (the titular cat), desperate to maintain her position.

Maggie's self-preservation instincts mirror those of Big Daddy. A bombastic bully prone to offhand humiliations, Big Daddy -- believing he has weathered a health scare -- prepares to reclaim his position at the head of the family.

What he doesn't know is that he has terminal cancer, a diagnosis his family has kept from him and his doting wife, Big Mama, shrewdly played by the excellent Cindy Gold, whose portrayal hints at the steeliness that underpins the character's silly demeanor. 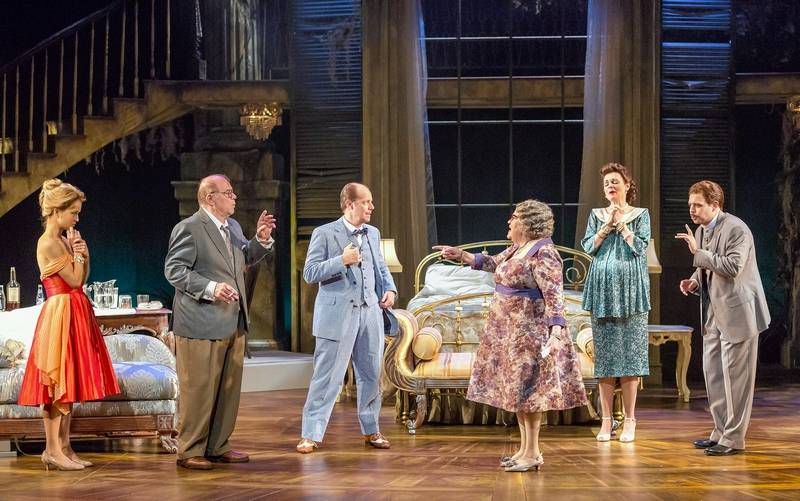 Act I's second half is all DeCaro, who spends most of it in conversation with Bowden's too-detached Brick. There's a complexity to DeCaro's roughly eloquent performance, which reveals a man of surprising tolerance (and genuine compassion for his troubled son), who's anxious to escape the web of lies his family has concocted.

Here's hoping it's not the last. That goes double for Dodge, whose direction leaves a lasting impression.

Parking: Free parking in lot adjacent to the theater