Highly Recommended ***** Let’s go back in time. The year was 1978 ( about 40 years ago) . During that year a Pulitzer Prize was awarded to D.L. Coburn’s “The Gin Game”, a two character play that takes place on the patio of a nursing home in any city in any state at any time. This is in fact, a two person play and although many productions have been done to great success, I must say that Drury Lane’s production starring Chicago’s favorite theatrical duo, John Reeger and his wife, Paula Scrofano , is indeed a play that should be on your “must see” list.

Before going into the story-line and the review, for those of you who are unfamiliar with these actors, they have been in over 150 productions in the greater Chicagoland area. In fact, this theatrical couple could conduct a history class on Drury Lane Theatre itself. Many of you may not be aware of the original Drury Lane at 95th and Western Avenues (South side) in Evergreen Park. The theater was a dinner-theater. They then expanded to Oak Brook Terrace and later Lincolnshire (yes, the Marriott Lincolnshire theatre at one time was Drury Lane North) and then down near Michigan Avenue at Water Tower (now the Broadway In Chicago Playhouse). As you can see, Drury Lane has a lot of history. So does this amazing couple, who began with Drury Lane back in October of 1984 in “Give My Regards to Broadway”.

Now, on to the actual story and review: “The Gin Game” ( the non-musical production of this season) takes place in a nursing home. Not a fancy one, but in fact, one that accepts those on public aid. Weller Martin (played to perfection by Reeger) has been placed in this home and spends most of his time alone. Before the actual play begins, we see him shuffling cards, dealing and peeking at “the other hand”. One might say that he is just biding his time from meal to meal, a true loner with no family or friends. Enter newcomer Fonsia Dorsey (fabulously portrayed by Scrofano). She is unhappy about being here, away from the small family she claims to have.Weller convinces Fonsia (who he calls Fonsy) to play some Gin with him. She tells him that she hasn’t played “rummy” in years, but if he will explain it, she will play. 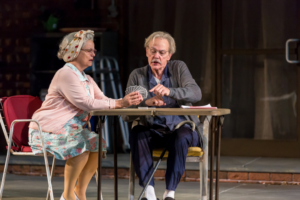 They begin to play, and hand after hand she beats him. His frustration mounts and his anger grows as this woman who knew nothing seems to win no matter what he deals or discards her. During this match, they become open about some of the things that have brought them to this place and their individual circumstance in life. As their secrets unfold, they try to reach into the minds of the other to make their lives better. We find out much about these two lonely people who as the days go by, show they are in need of each other to have just one caring person.Yes, they fight! Yes, they argue and of course, each attempts to shield the truth from the other. It is how the truths are brought out and the sharpness in which Lehman has directed this “Dynamic Duo” that makes this production so very special.

There are times during this two act play( a bit less than two hours with one intermission) that one feels they are falling for each other, as well as times when it appears that Weller might just kill Fonsy. He hates to lose and just keeps on doing so. Is she just lucky? Or is she that good a player? What matters most is the chemistry between these two wonderful actors as the dance around the Gin table (as well as dance a small dance on the stage) and tangle with the mental part of the game. This is a play that has been done by some great duos in the past: Mary Tyler Moore and Dick Van Dyke, Jessica Tandy and Hume Cronyn as well as Cicely Tyson and James Earl Jones.

This production is smoothly directed by Ross Lehman on a marvelous set (Katherine Ross) with delightful lighting (Lindsay Lyddan), perfect sound (Ray Nardelli), costumes by Mathieu H. Ray , props (Cassy Schillo) and projections by Mike Tutaj. I am sure that Coburn wanted us to feel for the lonliness of these two characters and what it might feel like to have no family or even a visitor in your life. To know that the majority of people who reside where you do are just waiting to die. I am of an age where I do think about this and am thankful that I have family and that they care about my well-being. In this masterpiece, we see the other side of the picture and we watch how two strangers, who have no reason to be friends, form a bond because of a card game. We also see the game pull them apart as well as bring them together. 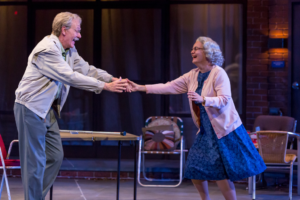 My heartiest congratulations to Kyle DeSantis, President of Drury Lane for making this happen and bringing this marvelous production to their stage (Grandpa would be so proud). If you are a lover of quality theater, put this on your “MUST-SEE” list! If you enjoy watching Reeger and Scrofano work, this is an experience that you will want to have! “The Gin Game” will continue at Drury Lane Theatre Oakbrook thru August 13th with performances as follows:

Senior discounts and student discounts as well as diner and lunch packages are available.

To see what others are saying ( and I am pretty sure you will be seeing Jeff nominations on this one), visit www.theatreinchicago.com, go to Review Round-Up and click at “The Gin Game”.