“Joseph and the Amazing Technicolor Dreamcoat”

★★★★★Over the years, time after time, I am asked, “how can you see a play over and over and then write a review”?  My answer has always been that each director brings something different to the production, and with a new cast, choreographer and set, anything can happen. Tonight’s opening at Drury Lane Oakbrook, is probably the PERFECT example of this. They opened ” Joseph and the Amazing Technicolor Dreamcoat:. the Tim Rice/Andrew Lloyd Webber show that brought both of these geniuses to the world’s view. Here is something that has been around for decades and that Chicago area theaters have done and done and done…how can you do this show and make audiences feel that this is something worth viewing?

Let me tell you here and now- this is a production under the helm of director Alan Souza and with amazing choreography by Grady McLeod Bowman, that will “blow you away”! It has been re-imagined from biblical days to modern -day and now takes place in Las Vegas. Yes, Las Vegas! Joe ( a strong performance by Evan Alexander Smith, who has a solid vocal range and a smooth stage presence) hops off a plane and arrives in his hotel room on the strip. Enter our Narrator (the absolutely astounding Christina Bianco, who will literally “blow you away”) to get this party started. She takes us into the world of Dreams and Joseph’s father and 11 brothers.

We have all the same songs as the original, but it is the presentation that is mind- boggling and will make you remember this night for years to come! GUARANTEED! Yes, there will be some reviews that feel this is not what you do to a hit, but I for one had the “time of my life” laughing hysterically at some of the great additions that Souza’s creativity brought to the stage in Oakbrook. We start in a hotel room, where brothers come from everywhere and even Elvis shows up in the bathroom.

Bianco’s Narrator is far different than anyone has ever seen before as she plays the role as almost every woman singer that has EVER played the Vegas strip; Streisand, Peters, Cher, Liza, Judy and a host of others. ( by the way, during the curtain calls, she does a song where she does them all, and more with actual photos projected above, and never misses a beat), I feel that we have a Jeff Award winner here!  Smith is not lacking in talent either. He is fun to watch as he goes through the story unsure of who he is and where the story is headed. His rendition of “Any Dream Will Do” is powerful, and the feeling expressed during “Close Every Door” is strong as well.  I loved the way this show progressed!

The brothers are a key component to the production working and this cast is superb! Paul-Jordan Jansen ( Rueben , who has a number of his own-“One More Angel in Heaven”),  Simeon (Anthony Sullivan Jr.), Levi ( Nick Cosgrove), Napthali (Nathan Fister), Isaachar (James Monroe Stevko), Aher (Kevin Nietzel), Dan ( Tony Carter), Zebulon (Alejandro Fonseca), Gad (Anthony Avino), Benjamin (Nathaniel Braga, who does a great “Benjamin Calypso number with his brothers)) and Judah ( E. Clayont Cornelious). a great group of men who dance, sing (they do some harmony that is worth the price of a ticket) and they even do a number to end the first act that will knock your sox off ( in drag)!

If you have seen “Joseph” before, you are aware that the Pharaoh is played as Elvis, which has always been a “hoot”. In this rendition, “Elvis has left the building” and instead, we have a more modern day musical man, Elton John ( Colte Julian is outstanding in his portrayal of this “piano man” as well as Jacob / Joseph’s father and the Potiphar). His Elton John is another noteworthy performance that could also win a Jeff. In fact, this production might be the crowning glory of the year for Drury Lane, despite having a great “42nd Street”. 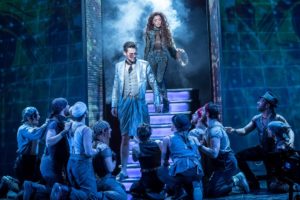 The ensemble is small ( well, with 11 brothers, how big an ensemble is needed?) but very talented. Jed Feder, Brad Giovanine, Lexis Danca, Julia Klavans, Cara Salerno and Lindsay Loretta Prerost. I said small, but only in numbers. Large in talent!

The tech side of the production is also very noteworthy with a great set designed by Kevin Depinet, brilliant costumes by Ryan Park, lighting by Lee Fiskness, sound by Ray Nardelli, props by Cassy Schillo and musical direction by Alan Bukowiecki. A great crew that makes this production glow and glimmer from the Prologue to the Finale and all two hours ( including intermission) between. Alan Bukowiecki and his orchestra, who are under the stage, handle the music with greatness as seven people sound like a full pit.

If you do not know the entire story, it is from a book called the Bible and tells of Joseph, the favored son of Jacob being given a beautiful coat of many colors. His 11 brothers, very jealous, decide to get rid of him so that they can win their fathers love and adoration. They sell him as a slave, but tell their father a different story. Joespeh ends up being brought to the Pharaoh to interpret his dreams. note: that is part of Joseph’s mystery- he can read dreams! and he is made an administrator. The brothers come to Egypt seeking help and not realizing that they are asking help of their “brother”, end up re-uniting and they all live happily ever after.

If you have never seen “Joseph” ( where could you have been?), you owe it to yourself to get out of the house and see this brilliant production. If you have seen it before, no problem! This is a unique, re-imagination that will make you either swoon or at least fall in love with the story. Thank you Drury Lane for allowing your people to take a known entity and re-do it into something that will be in my mind for years to come. This marvelous production will continue at Drury Lane Oakbrook located at 100 Drury Lane in Oakbrook Terrace ( just North of the Oakbrook Center) thru  March 25th with performances as follows: 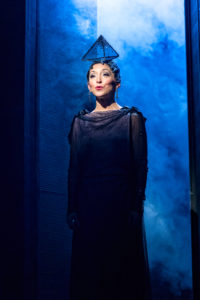 Free Parking is available and if you opt, valet parking as well.

To see what others are saying, visit www.theatreinchicago.com, go to Review Round-Up and click at “Joseph and the Amazing Technicolor Dreamcoat”.

DO NOT RUSH OUT AT THE END OF THE PRODUCTION!!!

The curtain calls are powerful and you will get to see the true brilliance of Christina Bianco as she does every female star who has ever played Vegas! Very impressive!