★★★★★Just when I thought I had enough “Mamma Mia!” productions, along comes another sharply staged rendition of this zany musical that was put together using the powerful music of ABBA at Drury Lane Theatre. Under the careful eye of its director, William Osetek, and the amazing choreography of Jane Lanier, and with outstanding musical direction by Roberta Duchak, and with a solid cast of players, who are both talented and highly energetic, a full house was on its feet before the ending of the story, or should I say “fairy tale”.

For those of you unfamiliar with “Mamma Mia!” ( I cannot believe that to be remotely possible with its many productions and movie versions), it is a story about Donna (played to perfection by Susie Mcmonagle) and her daughter, Sophie ( Rebecca Hurd knocks it out of the park). They live on a tiny Greek island. Sophie is getting married and she has invited the three men named in her mother’s diary to come. One of them MAY be her father and she has always wanted to know more about this one missing piece of her life’s puzzle. That is pretty much the story and we get to watch as Donna greets these three men, Sam ( Jeff Parker has the right look, but seems to be just a little stiff), Bill ( Michael Accardo nails this character) and Bill ( Stef Tovar, who with every singing role, shows just how wide his range is). Sophie asks each of them to walk her down the aisle, and each agrees. It seems each, in their own way, feels the need to do so. 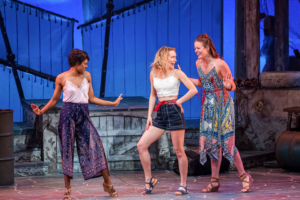 Meanwhile, Donna, who was a singer in her youth , has asked her back-up singers to the wedding as well. After all, they have been BF’s for 20 years plus. Tanya, the very sexy divorcee’ is played by McKinley Carter, who shows a new side of her vast talents. We have seen her do many roles, but Tanya is indeed a special one- she got it! The other BF Rosie ( an incredible Elizabeth Ledo, who I have never seen as bright as she is in this one. In fact, when she does “Take A Chance On Me” with Accardo, the audience goes wild. A show stopper for sure!) is an author of cookbooks. Bill is an author as well. (Get it). 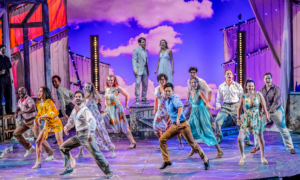 The groom to be is Sky (deftly handled by Liam Quealy, who many of us have watched mature on Chicago’s stages) and Sophie’s two best friends, Ali ( the lovely Sierra Schnack) and Lisa ( the adorable Katherine Lee Bourne) 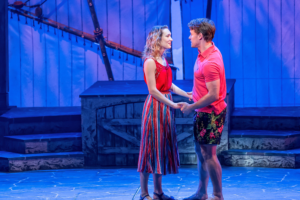 are in on Sophie’s plan, aiding her cause from the very onset. The two main employees of the Taverna that Donna owns are Pepper (Kevin Corbett) and Eddie (Yando Lopez is another actor who keeps showing us how wide his range is) and the ensemble of highly energetic cast members add the spice to this production that bring all of these songs by Benny Andersson and Bjorn Ulvaeus to life. They are :Andrew Weir, Alex Benoit, Maddie Dorsey, Brian M. Duncan, Cory Goodrich, Shannon McEldowney, Johanna McKenzie Miller, Nich O’Neil, Dana Paulo, Zach Porter, Kyra Sorce, and Lance Spencer. Great group of highly talented young performers.

The songs of ABBA are tied together by the book written by Catherine Johnson that was conceived by Judy Craymer, creating a story that fits the music. Songs like “Chiquitta”, “Dancing Queen”, “Honey Honey” and many more. In all 22 songs that pretty much everyone in the audience knew by heart. During the curtain call, where 98% of the audience was on its feet, you could hear them chiming in and many, myself included were even swaying and dancing in their space. I always talk about audience involvement, and for sure this production did just that!

On the technical side, the set (Jeffrey D. Kmiec) is much simpler than I have seen before ( except for the in-the-round production, of course) and it worked in keeping the flow of action easy. The lighting (Lee Fiskness) and sound ( Ray Nardelli) and the costumes (Marianne Custer) were all, as usual at Drury Lane, perfect. The band led by Christopher Sargent were flawless, making for a production that will gladden the ABBA lovers and make them feel at home.

“Mamma Mia!” will continue at Drury Lane Oakbrook thru April 14th with performances as follows: 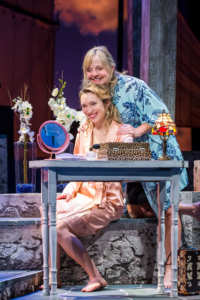 Running time 2 hours and 20 minutes ( with an intermission) 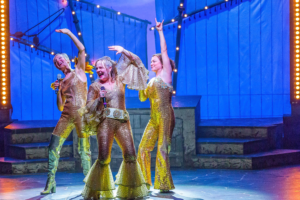 To order your chance to see this production, call the box office at 630-530-0111 or Ticketmaster at 800 -745-3000, visit http://www.DruryLaneTheatre.comor if in Oakbrook area, you can stop at the box office located at 100 Drury Lane in Oakbrook ( just North of the Oakbrook shopping center.

Plenty of free parking ( as well as valet for those who prefer).

To see what others are saying, visit www.theatreinchicago.com, go to Review Round-Up and click at “Mamma Mia!”