★★★★★ I know that for some, my rating may seem a bit high for this musical version of Roald Dahl’s “Matilda”, but compared to the Broadway tour that whizzed into Chicago in 2016, the current production, now on the stage at Drury Lane Theatre, is a far better show. The script ( book by Dennis Kelly) and music ( Tim Minchin, music/lyrics) are still only so-so, with very little music that will stick in the mind, and the original story is not my “cup of tea”.

For those unfamiliar with Dahl’s character and the story, we begin at a birthday party for a five -year old, precocious little girl with extraordinary talents. Matilda ( played to perfection on opening night by Audrey Edwards/ on other performances, this role is handled by Natalie Galla). Ms Edwards is adorable and wins us over quickly. Her voice will take you back to a time when audiences fell in love with characters like “Annie” in big musicals based on characters we knew from other mediums. Matilda is truly unwanted by her parents, played in this production by Jackson Evans ( who has proven to be a solid character actor) and Stephanie Gibson. Father is a used car salesman who wanted another son is unhappy about this “girl” who he keeps referring to as “boy”. The “other” son Michael (Evan C. Dolan), appears to be a little lame in the head , so Matilda turns to books and her thirst for knowledge. 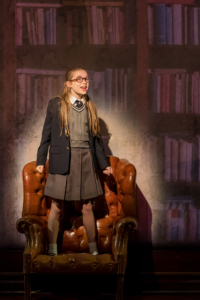 Matilda, could in many ways be considered a “super-hero” in that her ambition and thirst for knowledge, during these days of computer games and movies, is something that may just change the future, back to the days of old, when reading was a positive thing. Matilda’s school, headed by the “enemy”, Miss Trunchbull ( Sean Fortunato is a scene stealer in this unique “drag” role) believes that children should be seen, not heard and clashes with Matilda, who “she” sees as a rule-breaker and thus bullies .In fact, part of the story that is being told is about being bullied as well. The librarian, Mrs. Phelps ( Linda Bright Clay) and Matilda’s teacher,  Miss Honey ( deftly handled by Eben K. Logan) are the bright spots in her life and her desire to read more.

What truly makes this version of the show outstanding and worth seeing is the ensemble work and the staging by Mitch Sebastian ( both direction and choreography), The musical direction by Roberta Duchak, as always is superb. By the way, the kids never lose their accents, keeping us very “English”, yet crisp and understandable. The kids! Let me talk about these talented boys and girls. WOW! This production is close to three hours in length and the kids are not in a scene or two, they are on the stage a lot and when not, they are off changing costumes. 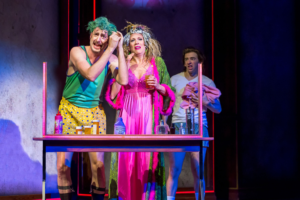 The kids who truly make this show the work that it is are: Nathaniel Buescher, Saige Chaseley, Andrea Crisp, Anna Fox, Carter Graf, Nolan Maddox, Patrick Scott McDermott ( you will find your eyes drawn to this little tyke), Bailey Mosbacher, Lilian Rene Renteria ( the smallest of the kids , who truly proves that good things come in small packages), Gabriel Robert, Ava Tommasone and the hysterical Joshua Zingerman. One day, he will be a main stage character actor, for sure. These kids are filled with talent as well as high energy. 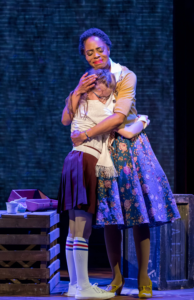 The rest of the ensemble, or as one might call them “the adults” are also superb. They represent the kids for some of the numbers and play other roles as needed> They are Alex Benoit, Lydia Burke, Andrea Collier, Lexis Danica, Evan C. Dolan, Annie Jo Ermel, Austin Ryan Hunt, Paul-Jordan Jansen, Andrew MacNaughton, Casey Sanders and Liam Quealy. Highly energetic and again, very talented. It is hard to believe that this show won as many Tony Awards as they did, Perhaps that was a slim year for new productions, but I am anxious to see how our Jeff Awards voters go on this one. This is a “dark musical” so make sure, if you bring kids, they either know the story or can handle what they will witness. 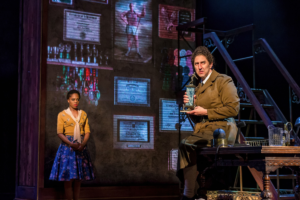 As I said earlier, this is not a script or music that I loved, but this rendition and this vibrant cast kept me into the story and allowed me to enjoy the theatrical experience that was set before me. The Drury Lane orchestra, led by Christopher Sargent brings the music alive with only seven musicians- great work!

“Matilda :the Musical” will continue at Drury Lane Theatre in Oakbrook thru June 23rd with performances as follows: 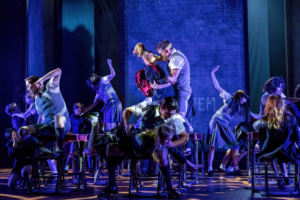 The theatre is located at 100 Drury Lane in Oakbrook

Plenty of free parking ( valet is available as well)

To see what others are saying, visit www.theatreinchicago.com, go to Review Round-Up and click at “Matilda the Musical”