Review: In 'Little Shop of Horrors' at Drury Lane, an Audrey for the ages

Without “Little Shop of Horrors,” we wouldn’t have Disney’s “The Little Mermaid,” “Beauty and the Beast” or “Aladdin.” That’s because the spoof 1982 off-Broadway musical (based on a B-movie shocker about a young florist named Seymour and the Faustian bargain he strikes with a carnivorous plant) is how Disney first found Alan Menken and Howard Ashman.

Menken and Ashman went on to write most of the scores for the monster-hit movies that revolutionized Disney animation in the 1990s — the sticky, kid-friendly ones that still drive parents to insanity — followed thereafter by an incomparable slate of family-oriented stage musicals.

So I for one would argue that the tawdry old “Little Shop of Horrors” is among the most important American musicals ever written. If you don’t believe me, listen to “Somewhere That’s Green,” the sales clerk Audrey’s aspirational ballad from “Little Shop,” which you currently can hear at the Drury Lane Theatre in Oakbrook Terrace, and then listen to “Part of Your World” from “The Little Mermaid.” Sure, Disney Disneyfied the aesthetics. But the guts are the same.

“Little Shop,” then, is a gem of its kind. There really isn’t any other off-Broadway musical with similar title recognition and entertainment value across multiple generations, which explains why I find myself watching the chatty plant suck down Mushnik the florist, Orin the dentist and a plethora of other bloody treats on a pretty regular basis. Theaters can rent the plant and feel the cha-ching at the box office while only ponying up for nine actors. I’ve generally preferred productions in intimate settings, but then I’d not seen Kelly Felthous play Audrey.

I’m telling you, this phenomenally detailed actress (a “Wicked” veteran and recent transplant from New York) takes a deep dive into the shop assistant with the lousy taste in boyfriends. She’s built an eccentric character, all right, even down to the wacky voice, and the deadpan comedy is all there. But Felthous’ work is so rooted in truth and pain that you buy every moment.

I’ve heard a whole lot of people do “Somewhere That’s Green” in my time, but I think Felthous sings it better than I’ve ever heard. It’s just so in the moment: she mines every minute idea in the song (even in the middle of a lyrical line) and her eyes take on such a hopeful glaze that you want to send her a delivery of shrink-wrapped furniture, just so she can keep it neat and clean. Aside from the fabulous voice, the key is that she doesn’t condescend to Audrey. She lives her. When the song I ended, I was ready for an instant reprise. 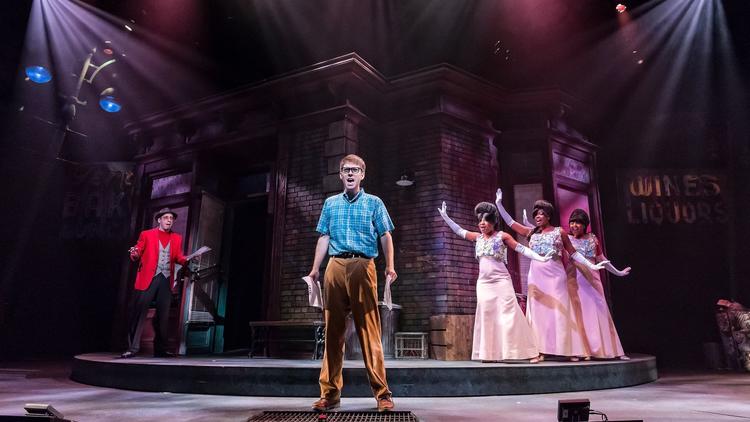 Reason to brave the traffic right there, “Little Shop” fans, although you’ll also get a vulnerable, lovable Seymour in Will Lidke, a nicely nasty Munchkin in Ron E. Rains and, for sure, a lush bevy of eccentric wackos from Steven Strafford, who has the sensibility this show already needs but often doesn’t receive. And the harmonic local urchins — played by Melanie Brezill, Candace C. Edwards and Melanie Loren — are especially warm-centered.

Director Scott Calcagno’s production doesn’t make any unusual choices: the stellar plant combo of Lorenzo Rush Jr. and Matthew P. Sitz is a reprise of the recent American Blues Theater production. And although Kevin Depinet’s set is deftly scaled and highly effective, you keep waiting for neon that never ignites, even in fun.

“LIttle Shop” hardly needs any tinkering after all these years. But I’m telling ya, Felthous’ Audrey is something else entirely.

Chris Jones is a Tribune critic.