Review: 'Matilda the Musical' at the Drury Lane is mostly a letdown

"Matilda," the proto-feminist story of a gifted little girl with nasty parents, is perhaps the best family musical of this young century. Prescient for 2010, it managed both to be a thrilling, spectacular event in London, on Broadway and on tour and yet entirely in the irreverent, oft-kilter spirit of its creator, Roald Dahl. In its affirmation that young people, especially girls, need to be empowered, heard and sometimes rescued from horrors they cannot control, "Matilda" threw off the shackles of many levels of adult repression of the young, especially in education.

The show made you ache for the fate of some kids, yet Tim Minchin's score and Dennis Kelly's book both were huge fun. The villainess, Miss Trunchbull, made Cruella de Vil look like an amateur. And Matilda — resilient, battle-scared, independent, brilliant, determined to change her story — was the greatest of heroines. Any adult seeing the show ached for their own youth, ideally re-lived with adult awareness.

Which brings me to the mostly disappointing Drury Lane production, which opened Thursday night. "Matilda" works in almost any circumstances, especially when you have as many talented kids as there are on the stage in Oak Brook. There are things to like about this version of the show — and all those things involve performers, such as Sean Fortunato's mincing, terrifying Trunchbull, Stephanie Gibson's superbly crafted Mrs. Wormwood and (on opening night), the winning Matilda forged by the sixth-grader Audrey Edwards.

But the director, Mitch Sebastian, treats material he appears not to trust like it's some sort of Grand Guignol horror show — there are so many expressionistic shadows in this staging, you feel like you're watching Fritz Lang's "Metropolis" at times. There is a complete lack of awareness of the show's emotional vocabulary. And, time after time, Sebastian wrecks the crucial simplicity of many scenes with oodles of portentous directorial conceit, usually involving video, moving walls and shadowy figures in black, looking like they're runaways from an audition for "The Addams Family."

Luxury should be lived in

Experience the 2019 INFINITI QX80. Uniquely designed to adapt to all the extravagant experiences life has to offer.

The most egregious disaster involves "When I Grow Up," a simple but inestimably beautiful song wherein kids, mistreated kids, dream of having adult control, while their grown-up counterparts look back with longing on their own lost youth. Every other time I've seen the show, kid and adults cried together at all the awful things we do to each other, and everyone vows silently to make change. But Sebastian's staging — which involved kids' voices coming out of adult mouths — merely confused. It was awful, as was the scene when Matilda finally finds a home with her teacher, Miss Honey (Eben K. Logan).

That scene in a little house should be the simplest thing in the world — a woman finds a daughter she loves and that daughter gets the mother she deserves. But not here, especially since Logan, a big talent, seems to have been directed to be perpetually insecure, which is she is supposed to be the epitome of quiet feminist strength, the greatest of mothers. That choice throws off the show. 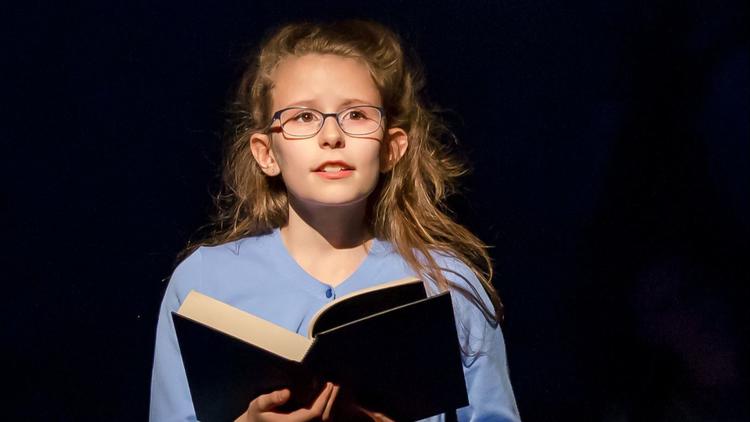 I'm aware of the danger of critics loving material too much, and of the challenges new directors face when trying to put their own stamp on a musical wherein the original production looms so large in the memory. And the broad comedy in this staging is stronger than I may have so far have implied, especially when we see the fine work of Jackson Evans and Evan C. Dolan, both of whom will tickle you. And did I mention the talents of these local kids?

But here's the thing. This production lacks heart and its pretensions get in the way of what matters. Doing Dahl is a bit like doing “Harry Potter.” Like J.K. Rowling, Dahl understood that kids know that the world is not safe, despite all the best efforts of the adults who love them. The cruel world of "Matilda" is just a heartbeat away from our own. It's not some campy, fantastical haunted house, but in our own cities. What the theater — and this musical — can do is teach you how to cope.

Chris Jones is a Tribune critic.