★★★★★ Tonight, for the fourth time, I watched “Rock of Ages”, a  true “rock concert” made into a play, but with a local flavor. There was no major guest star as we have seen in the previous “Broadway In Chicago” versions circa  2010 ( Bank of America Theatre), 2012 (smaller version at Broadway Playhouse) and 2014 ( Bank of America Theatre, again), and now, on the stage at Drury Lane Theatre, a very fun-filled energetic “knock-out” version is ready to show Chicagoland its stuff. Drury Lane Oakbrook is kind of an unusual venue for this particular production only in that when one thinks Drury Lane, one thinks an older, more gentle crowd (certainly not a “rock opera” or “rock concert” crowd). But the opening night audience was enamored with what Director Scott Weinstein brings to the stage.

“Rock of Ages” with a book by Chris D’Arienzo and musical arrangements by Ethan Popp tells the story of “Glam Metal”, the music of the 1980’s on Sunset Strip. The people who flocked to this sound were those in search of their own identity, and thus this story was “birthed”. The era of music was indeed its own “theater”. The costumes (which people called clothes), the story their music told, and their rebellion. As it is noted in this play “If the parents hated it” , it was good!” The 1980’s were a crazy time. Fashion and hair was part of what we saw in the young people and music was loud and glitzy , as were those who performed it.

In this story, our narrator, Lenny (Nick Druzbanski is amazing in this role) who works at The Bourbon Room ( a superb set designed by  Jeffrey D. Kmiec) tells us the ups and downs of the characters that are part and parcel of the story. It is an area that brings happiness to the young people who go to Sunset Strip for their music and pleasure, but for the city, an eyesore. When a foreign developer, Hertz (masterfully played by George Keating) and his son  Franz (the very comical Nick Cosgrove) meet with the mayor (John Edwards, who also does a great number of ensemble roles) to show him that they can bring a mall to the strip which will bring thriving businesses and great revenue to L.A., it is deemed that the strip needs to be torn down, ending the “music”. 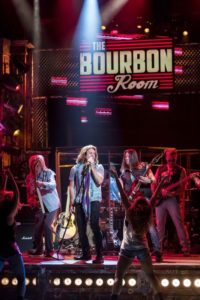 Meanwhile, some young people who have come to L.A. and the strip to make their fame and fortune meet and fall in love. Their careers are more important than their future, so things happen that could change their lives, but thanks to the book, don’t.The “boy” is Drew ( well handled by Russell Mernagh), the girl ,Sherrie ( Cherry Torres). They are adorable together, but they lose each other before they end up with each other. Yes, it has a “happy ending”! This show features 28 hits by the following: 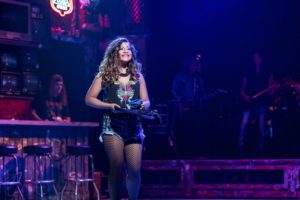 Bon Jovi, Journey, Styx, Pat Benatar, Poison, REO Speedwagon and more. “Here I Go Again”, “Hit Me With Your Best Shot”, “Nothing But A Good Time”, ” We’re Not Going To Take It”, “Waiting For a Girl Like You” and the list goes on- as I said earlier, and in previous reviews, this is a rock concert with a story added to bring it all together and I must say the group they have assembled at Drury Lane is the BEST I have seen to date! Having a cast that includes Donica Lynn, Gene Weygandt ( he is the best Dennis I have ever seen and appears to be having as much fun as the audience does), Adam Michaels as the rock star Stacee Jaxx (a solid performance), the adorable Tiffany Tatreau, Andrea Collier, Annie Jo Ermel, Michael Ferraro, The always reliable Sharriese Hamilton, Colte Julian, Lindsay Loretta Prerost and last but not least, Sawyer Smith (who does a bit as a Train Conductor that will knock your socks off). What a tremendous ensemble! 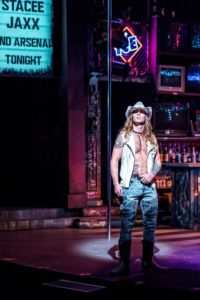 The Choreography by Stephanie Klemons and the musical direction by Roberta Duchak are delightful additions to this show, making it flawless. Theresa Ham’s costumes are bright and she has created a great number of great quick changes. The lighting by Greg Hoffman and sound by Ray Nardelli are flawless and the projections by Rasean Davonte Johnson are fun. This is also a show with lots of props and Cassie Schillo gets it all right! The “Rock of Ages” band is not in the pit as they are for most Drury Lane productions, but right on the stage-center stage under the direction of Chris Sargent. They are as follows: 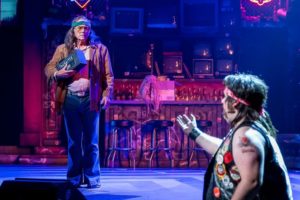 “Rock of Ages” will continue at Drury Lane Theatre located at  100 Drury Lane in Oakbrook (just North of the Oakbrook Center) thru October 15th with performances as follows: 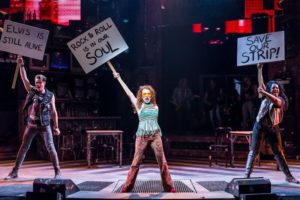 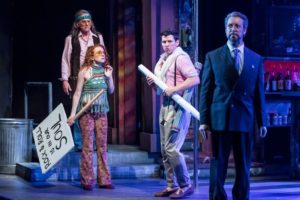 There are student and senior discounts. I suggest that kids under 12 probably should not see this production, but you know your kids!  Dinner and lunch packages are available and of course, plenty of FREE parking.

To see what others are saying, visit www.theatreinchicago.com, go to Review Round-Up and click at “Rock of Ages”.